What are your feelings about this first French retrospective?

I feel like saying “At last!”. I wasn’t expecting it anymore, nor did I believe it would ever happen. I am very happy with this major exhibition in Marseille… Compared to others I have done in the past, I genuinely have the means to express myself here. For instance, this retrospective in Marseille will certainly be much bigger than my first (Love has no End), which took place in 2008 at the Brooklyn Museum in New York.

Do you feel intimidated?

Not at all! I am a brave person. I like challenges. I am not intimidated. On the contrary, it gives me wings, and I can’t wait to see the result.

Do you have any ties to the city of Marseille?

Not really. I grew up in Nice… Nice and Marseille, they are two different worlds! I didn’t know what to expect when I came here… But I’m actually very happy to be in Marseille. And to be doing this exhibition in three different places allows me to familiarise myself with this beautiful city on a daily basis.

What are your first impressions?

Marseille is a bit of a copy of Algiers! The light first…. And the population. Besides, the Panier district reminds me a lot of the Casbah.

Can your works find a particular resonance in this city?

I am convinced of this. That is why we are presenting a garden-sculpture in Arabic. This is the first time I have used Arabic in my gardens. The work I am presenting in Marseille was originally conceived for another project that was to take place in Saudi Arabia. But it was refused there, as it was considered too political. By presenting it in Marseille, I know that the Maghreb and the Arab world will come to see it, so I am finally achieving my goal.

This work says “The woman’s voice is revolution”…

And it is addressed to all those who can read it. By changing a single letter, I (and others before me) have turned the traditional aphorism “A woman’s voice is a source of shame” into “A woman’s voice is revolution”. “The woman’s voice is a source of shame” is such a recurrent phrase, so deeply rooted in Arab-Muslim thought and culture that many people may not even notice the change at first glance! With this work, I wanted to invite people to become aware and reflect on these ideas that are anchored in us, almost in spite of ourselves.

Do you feel as strongly about women’s rights today as you did when you started 30 years ago?

Yes, always. I think there is still a long way to go and a lot of work to do…

Today, it would be hard to imagine a French art school refusing you access to a painting course on the pretext that you are a woman…

At the time, at the Villa Arson, boys had the privilege of being able to access certain places or certain tools; for example, they could go off alone to cut a piece of wood and come back… We, the women, had to be accompanied. Or someone had to do it for us… Yes, I am talking about France!

Moreover, during my studies, in 1987, I spent two semesters at the School of the Museum of Fine Arts in Boston, and there, I was very afraid to use certain tools which in France were the privilege of the boys. I kept saying “I don’t know how to do it”. So I was told that it was simply not acceptable for an art school student not to know how to use various tools and I was pushed to learn! I was taught how to weld, how to work with metal and wood and so on. And that’s how I came to understand that women have the right to do whatever they want.

That trip to Boston opened my eyes. At the Villa Arson, we were told that women were already liberated, that the feminist movement had already achieved its goals; whereas there, I discovered that the feminist movement was in its second or third generation, and that it was still very strong and demanding! I wanted to take this discovery back with me to France. After my two semesters in Boston, I wanted to come back to the Villa Arson because it is a good school! It simply didn’t give me the tools to paint or sculpt, but it did give me the tools to think. And to fight. And that’s fundamental!

Yes, and it is paradoxical, indeed… But I was able to construct this reaction in an artistic mode “à la française”.

Abroad, are you considered a French artist?

No. It’s me who specifies this every time. I obtained French nationality very late, barely a year ago. I was actually quite angry during my studies, because in addition to not having access to painting classes, I didn’t have access to nationality either! At that time, I wanted to be French and only French. I didn’t want anyone to tell me I was Arab, even if it was written on my face. But I was forced to accept my difference…

At the same time, my artistic work is interested in women; not French women or Arab women, but all women, because it is a universal cause and struggle. The question of equal rights is a universal one. And it is not limited to the issue of the veil.

Is your artistic journey akin to a quest for identity?

I don’t know if “quest” is the right word. Because today, I have accepted my multicultural identity. What characterises me is that I seek to question one culture in the face of the other. Indeed, each culture thinks it is right. And it is by taking a step back, by managing to “extract” oneself from this culture, that one succeeds in looking at it, in questioning it, in criticising it.

I cannot judge Asian culture, because I don’t know it. But I can look at Arab, French and American cultures very well because I have lived them. I feel free to compare them. And to pick out, within each of these cultures, what I like.

Recently, it seems that you have developed a closer relationship with Arab culture and language…

When I was in France, all my work was in French. And then when I moved to the United States, I made works in English. Then came the Arab Spring… That’s when I realised that people in the Arab world were much more politically engaged than I had thought. In the demonstrations, I saw wonderful slogans and I started to write everything down. That’s how, in 2011, I made my first paintings in Arabic.  I understood that with this language I could address an audience that could read and respond to me.

The garden-sculpture presented at the Fort Saint-Jean, A Woman’s Voice Is Revolution, was originally designed for Saudi Arabia…

Yes, but it was rejected there.

Let’s say they didn’t want it.

Was this a provocation on your part?

I didn’t propose this sculpture to Saudi Arabia as a provocation. But at that time, it was the idea and the artistic project that haunted me… This sculpture was to be installed in a desert; I wanted to fill it with volcanic rocks. But they were afraid, I think… You know, the situation in Saudi Arabia is changing socially and politically; amazing things are happening there… But I think they are afraid of words like “revolution”.

I experienced more or less the same thing in Qatar: there, they didn’t want me to show my paintings with naked women… That’s why I started to make non-embroidered sculptures: through this new language, I could continue to talk about my favourite subjects, but in a much more subtle and “softer” way. I played the game and I’m very happy about it. Since then, I have fallen in love with sculpture and ceramics.

To the point of stopping embroidery?

Oh no! I spent 30 years of my life trying to paint without paint, trying to create a feminine language through embroidery… I made my own alphabet… And only now am I starting to write. 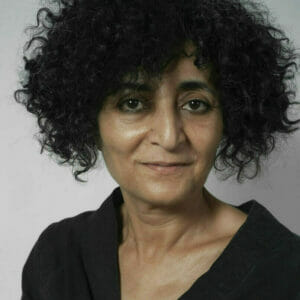