The compulsion to be a woman painter, then and now

“This new compulsion to be a woman painter…”

Printed on a gallery wall in the middle of the Luxembourg Museum’s exhibition Woman Painters, 1780-1830: the Birth of a Battle, the words of the Abbé de Fontenay resonate throughout the exhibition and beyond. The show, curated by Martine Lacas, tells the story of how French women painters fought to access formal training, participate in the events of the art world, and depict a greater variety of subject matter during the fifty-year period from the pre-Revolution to the Reconstruction eras.

Those who are familiar with Ghada Amer’s story will know that the struggle for women to be formally recognized as painters is also a central theme in her artistic development. Some two hundred years after the Abbé de Fontenay’s words were published, Amer, pursuing a master’s degree in fine arts in the 1980s, was informed that painting courses at the Villa Arson in Nice, France, were reserved for male students and she would not be able to participate due to her gender. “For me,” she has explained, “it was the end of the fantasy that France was a better culture for women.” (Amer in conversation with Thompson, 24). This experience, described by Thompson in her book Ghada Amer (Skira, 2021), became part of the Amer’s  “myth of origin” and inspired a “resolute rebellion against patriarchy that would motivate and propel [her] artistic strategy for decades to come.” (Thompson, 25-26).

One of Amer’s signature techniques is painting with thread: a method of inscribing women into the world of painting without paint (Thompson, 30). After embroidering domestic scenes on canvas (“Cinq femmes au travail”/ “Five women at work”) and painting pornographic images with threads that outline and obstruct the shape of faces and bodies, Amer’s latest project using thread to create portraits, this time of women she knows, takes the power of textiles in painting even further. Literally spelling out political and feminist messages to viewers in block letters that are embroidered over vividly colorful portraits of women, Amer’s recent works are a powerful reminder that a battle may have begun some two hundred years ago, but that it is far from over.

Photographs taken by Isabella Archer at the exhibition Women Painters, 2021.

By examining 18th and 19th-century works in conversation with Amer’s 21st-century portraits, viewers are invited to tease out some of the ways previous generations of women painters also experimented with fabrics and texture in their images to communicate and subvert dominant narratives. Anchoring the entrance to the Luxembourg Museum exhibition is Elisabeth-Louise Vigée-Lebrun’s infamous 1783 portrait of Marie-Antoinette, in a simple chemise dress. The painting, which Vigée-Lebrun displayed at her first Salon, shocked audiences because the garment was not considered suitable for the stature of the Queen of France, and the artist was asked to remove it from the event. The way that the choice of pattern and cloth challenged the perception and depiction of the queen for Salon visitors in 1783 resonates with the way patterns in thread – not paintings of thread, but actual thread itself- spell out political and feminist messages in Amer’s work. Amer’s use of a traditionally female, artisanal art form to spell out the realities and ironies of power and gender is given extra weight written out in thread. “It was we the people not we the white male citizens nor yet we the male citizens but we the whole people who formed the union,” begins the text in  Portrait of Kamilah.  These words, embroidered over the image of the subject, create a colorful mosaic that challenges the viewer to reinterpret how the famous “We the people” preamble of the United States Constitution has long been used to only represent one type of person.

Another work in the exhibit, Marie-Denise (Nisa) Villier’s 1802 “Portrait présumé de madame Soustras laçant son chausson”/” Presumed portrait of Madame Soustras lacing her slipper,” is an unusual image whose subject is shown exposing an (for the time, seductive) ankle while directly meeting the viewer’s gaze. Depicted wearing a delicately embroidered veil that covers one eye and reveals the other, the cloth protects and exposes the subject’s gaze which captivates the viewer. Amer’s use of thread parallels the use of fabric and texture in Villier’s work : the thread that is directly layered onto Amer’s portraits protects the subjects from the gaze of onlookers and simultaneously commands the viewer’s attention. Just as the gauzy fabric surrounding madame Soustra’s face creates an aura around her head, the colorful threads that dangle across Charlotte’s face both cloak her visage and emphasize the power of her eyes that, painted dark green, jump out through the dangling threads and outlines of words traced across the canvas. The stares of Villiers’ and Amer’s subjects, though painted two hundred years apart, exude a similar confidence and calm through the material that obscures and accentuates their gaze at the same time.

Different generations of painters: Vigée-Lebrun, Villiers, and centuries later, Amer, each use a feminine material- textile – in a masculine medium – painting – to deliver impactful images, revealing a history of rebellion as societal expectations about the role of women and the subjects they paint in the art world. Viewing Amer’s work in conversation with her 18th and 19th-century predecessors is an opportunity to construct an alternative chronology of art history, where female artists, subjects, and techniques are better appreciated. 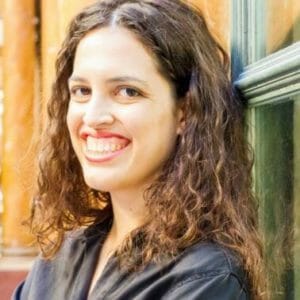 NextA Battle of SignsNext
On Key