Barbie Trees (2007) is a disenchanting fairy tale. It tells the story of how princesses become Barbie dolls and how princes are abandoned. In so doing, it holds up a mirror to its viewer, reflecting our assumptions straight back at us.

Traditionally, fairy tales instill wonder in their audience. In narratives filled with talking animals and witches, spells abound to hook listeners or readers to the plot all while offering a moral or social commentary that reflects the social beliefs of the times in which they were written. If nineteenth century fairy tales are today rewritten in accordance with a more progressive and feminist society – one which considers a woman’s place to have extended far beyond the confines of her prince’s kingdom – Barbie Trees, a collaborative monoprint by Ghada Amer and Reza Farkhondeh, does more than simply reimagine an outdated tale. It questions the idea of the tale altogether.

The wonder of fairy tales, according to literary critic Cristina Bacchilega, stems not from the magical narrative itself, but rather from the contradiction between the narrative’s ability to uphold social beliefs and its subversive construction which undermines these (see Bacchilega, Postmodern Fairy Tales: Gender and Narrative Strategies). This, she argues, is due to the fairy tales’ artifice. “To break the magic spell, we must learn to recognize it as a spell that can be unmade.” How then, does Barbie Trees dispel fairy tale enchantment?

Three elements of this artwork plunge us into the fairy tale universe. First we have the two faded dwarves from the Grimm brothers’ fairy tale “Snow White” as well as the recurring prince mentioned in the six embroidered circles that spell out “We Left Charming Prince Behind.” And then there are the tall grey trees that offer the backdrop of the story; they constitute the forest in which magic and mystery unfold in tales like “Snow White,” “Sleeping Beauty” or “Little Red Riding Hood.” But in the monoprint, each of these elements is somehow twisted, drawing our attention to the tale’s artifice. The dwarves shed their friendly character and instead appear to be conspiring in a corner. The prince who is archetypally known as “Prince Charming” becomes “Charming Prince,” a shift from name to description, from an identity to a trait of character. Even the trees are altered as they are rootless, floating as though by enchantment. Finding ourselves at the level of the branches, we do not watch the story unfold, but are rather immersed within it, suspended in mid-air.

The greatest manipulation to the genre of the fairy tale in Ghada Amer and Reza Farkhondeh’s monoprint  is the absence of any princess. Instead, we see not one, but seven Barbie dolls. The new protagonist of the story is a toy that embodies the fairy tale’s contradiction that Bacchilega identifies. Thin and beautiful, the doll’s existence upholds unattainable beauty standards imposed on women, and yet she is reduced to a representation. Her two-dimensional existence, as opposed to the more physical and lifelike three-dimensional plastic figure, reminds us of her construction. Moreover, the multiplicity of dolls in the lithograph divides Barbie into barbies. She is no longer whole; her identity is fragmented. The combination of these reversals destabilizes the fairy tale world and reveals its artifice to us as viewers.

The Magic Mirror: A Twist in the Tale

According to Bacchilega, nothing disrupts the magic of the fairy tale as much as  the mirror. A reflection, refraction and artificial frame of the tale, it simultaneously reveals and dismantles the fairy tale’s gendered worldview (see Bacchilega). In Barbie Trees, the embroidered circle acts as this mirror. Given their circular shape and because they are made of thread, the circles stand out in the foreground of the work. Even the words’ colours make the circles pop. The red, green, pink, green, orange, blue and purple are more vivid than the grey trees or faded characters. Thus resembling a mirror, they offer a reflection of the fairy tale, granting us an entry into its narrative. The circle becomes the lens, the frame, through which we see the work.

However, just as a mirror offers an inverse image, seemingly faithful and yet a distortion of what it represents, so too does Barbie Trees toy with the fairy tale it portrays. In its rebellious statement, the mirror-circle refracts the notions of gender that the fairy tale advances. “We Left Charming Prince Behind.” The author of this statement is likely the story’s protagonist, the Barbie dolls, who rebel by freeing themselves of their prince.

We can imagine this act of rebellion as a physical movement whereby the dolls come out of hiding. Because Amer and Farkhondeh made the paper from scratch themselves, they embedded the Barbies into it. They, along with the dwarves (who represent entrapment in ‘Snow White’ because they wanted to keep the princess with them) are literally enmeshed in the fabric of this artwork, eclipsed by the trees printed over them.

But thanks to the thread that stitches the mirror-circle, the dolls do not remain relegated to the background. The repetition of the statement expresses the dolls’ agency, the preposition “behind” indicating mobility. We can imagine the dolls moving through the monoprint, from background to foreground. They come out of hiding and are at the level of the embroidered circles, the layer of the work closest to the viewer. The circle’s round, hole-like shape, opens onto the world outside the fairy tale. If for viewers the circle offers an entry into the fairy tale world, it is for the Barbie dolls, an exit. Climbing through the circles, the Barbie dolls break through the narrative fourth wall. The fairy tale is no more. 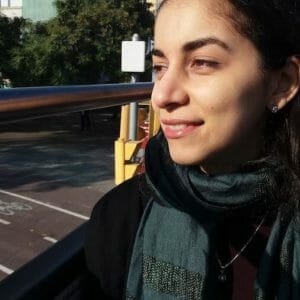