Ghada Amer’s show at Goodman Gallery in London opens on 4 May 2022 and runs till the end of the month. Entitled My Body My Choice, this is Ghada Amer’s first solo exhibition in the UK in twenty years. The artist brings together a new body of work that includes a garden installation, five of the artist’s signature thread and canvas paintings as well as two large flat sculptures (known also as drawings in space).

Ghada Amer’s garden installation takes up the well-known battle cry promoted by the women’s and gender equality movement since the 1970s “my body my choice” and spells each of its letters in a red resin box filled with plants. While over the past fifty years, this tagline has been co-opted by a number of groups around the world with entirely contradictory agendas, Ghada Amer’s garden, like her art in general, reminds us of the early intent of the mantra, that of promoting women’s rights and equality.

In an interview with Sahar Amer in April 2022, Ghada Amer states: “In Western societies, there is an assumption, especially among the younger generations, that the battle of the sexes has been won, that women have been liberated, and that their rights are secure. And yet, we are witnessing today a sharp regression of women’s rights and a stark rise of violence against women. However, in countries where one assumes women’s rights to be limited or absent, such as in Egypt, Iran, Afghanistan, or Mexico, women of the younger generation know they have a lot to gain from fighting for those very same rights that are eroding in the West. So they are not letting down their guard and they are continuing to fight fiercely.”

The phrases that Ghada Amer sculpts for her garden architecture are similar in that regard to the sentences that she embroiders on her canvases. These sentences are taken from a number of male and female authors from different backgrounds and they are intended to remind us of central teachings and wisdom related to women’s rights. Amer says that “by reading and repeating these sentences, they will hopefully become mantras, incantations that the viewer will end up remembering.” She adds that “women’s rights can never be taken for granted. Women must continuously mobilize, fight, and never let their arduously acquired rights decline, fade away and vanish.”

The citations that are sculpted in Ghada Amer’s gardens or carefully embroidered on her paintings do not speak directly about the status of women in any particular society. They do not address what is going on in the United States or the Middle East per se. Rather, her paintings and gardens remind the viewer that women must be vigilant over the rights they have acquired and never take for granted their liberation.

In addition to the garden and paintings produced for her solo show at the Goodman gallery, Ghada Amer is showing two large flat sculptures. These drawings in space are a technique she acquired during an art and industry residency at the John Michael Kohler Arts Center in Sheboygan, Wisconsin in 2017. She was grateful to spend three months at the Kohler Center, learning the techniques of molding and casting. Amer says that “this was an essential period of training that allowed [me] to master the process of molding large sculptures. I wanted to learn how to paint with clay so that I could portray women in my sculptures as expressively as I did in my painting.”

Ghada Amer’s flat sculptures bear striking parallels to her paintings, especially her well-known drips. Because here too, the lines of the metalwork evoke the dripping paint on some of her canvases. But her sculptures also play with shadow, creating dizzying 3D perspectives. Looking at her sculpture becomes akin to looking at its multiple projections on the walls. The shadows of the sculpture, layered, multiplied and superimposed on the walls, act like what we might consider a spatial echo. The transparency and the drips characteristic of Ghada Amer’s technique transform her sculptures into living installations. Responding to the light and the time of day, they fluctuate, dance, and tease the viewer to move around, look at the sculpture from different angles and watch each new shadow, each new composition reflecting and retracting on the walls of the gallery. 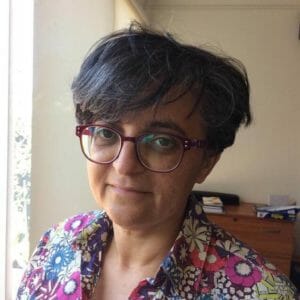 Sahar Amer
Sahar Amer (Ph.D. in French, Yale University, 1994) is Ghada Amer’s Director of Communications and Principal Content Writer. She has collaborated with Ghada Amer on a number of projects, including “The Encyclopedia of Pleasure,” “Majnun,” “One Hundred Words of Love,” and “The Words I Love the Most.” Prior to this role, she was Professor of French and Arab Studies at the University of North Carolina-Chapel Hill (USA) and Professor and Chair of the Department of Arabic Language and Cultures at the University of Sydney (Australia). Her primary research interests focus on the relations between Arab and Muslim societies and the West, and the notion of borders (cultural, linguistic, historical and geographic), not as elements of separation and division, but rather as fluid spaces of cultural exchange, adaptation, and collaboration. She has published several academic books, dozens of book chapters and journal articles and received prestigious honors and awards.